Not smart to basically threaten a public official. It is in fact illegal.
_____

So what really happened behind the scenes of Al Franken's ouster in the U.S. Senate?
_____

NYC isn't the rest of the country, doofus.

For the great majority of Americans, a car is a necessity.
_____

For the lazy motherfuckers called husbands, it's heads I win, tails you lose. 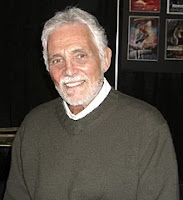 Obituary:  Actor David Hedison, 92, known for his role on television's Voyage to the Bottom of the Sea, has died.  He was a bit of a heartthrob in his role on the series.  He played opposite Richard Basehart, and the show was produced by Irwin Allen.  It ran for several years.  I used to watch it a bit when it first ran on television.

Hedison had a couple of daughters from his long marriage to Bridget, a television producer, who passed away a couple of years ago after nearly fifty years together.  One of those daughters, Alexandra, married Jodie Foster a few years ago.

Born Al David Hedison on May 20, 1927, in Providence, Rhode Island, Hedison discovered the theater while attending Brown University and studied in New York under Sanford Meisner at The Neighborhood Playhouse and with Lee Strasberg at The Actors Studio.

He worked alongside Uta Hagen and Michael Redgrave in-off Broadway productions by Clifford Odets and Christopher Fry, among others, and made his big-screen debut in the World War II naval drama The Enemy Below (1957), starring Robert Mitchum.

After starring in the original The Fly and Son of Robin Hood in 1958, he signed a contract at Twentieth Century Fox, changing his stage name to David Hedison.