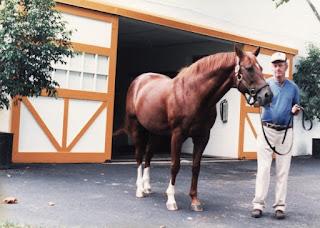 Today marks the  thirtieth anniversary of the death of racing legend Secretariat, who was put down in 1989 after a bout of laminitis.  He was only 19 years old when he died, but his legacy lives on forever.

He was called the "Elvis Presley" of horseracing.  I think it is apt.

I have written quite a few blog posts about the legend.  I wrote a long blog post back in 2003, one of the earliest posts in this blog's history (I can't believe I have had this blog for 17 years), and I thought I would repost it here:


As I Think of the 30th Anniversary

of the legendary Secretariat's sweep of the Triple Crown, I have to share what was certainly one of the high points of my life, when I finally got to see Secretariat "in person."

Although I graduated from high school in June of 1973, that was not the most important thing on my mind. Neither was the spiraling Watergate scandal. No, what I and millions of other people cared about in the weeks leading up to June 9 was whether or not Secretariat was going to win the Triple Crown. He was really the first horse in 25 years since Citation did the deed in 1948 to have a really clear shot at taking it. There were six other horses who had a shot in the interim, but all of them had chinks in their armor and failed. Secretariat, certainly in the minds of the media, was virtually guaranteed the victory.

Of course, as we all know, Secretariat didn't disappoint; in fact, he far exceeded expectations by winning the Belmont Stakes in the fastest mile-and-a-half ever run on the dirt and by the largest margin ever in a major race. He was, in Charles Hatton's memorable words, "a hero in an anti-hero age." I continued to follow the great horse's career through his wins and his defeats (which never should have happened). I vowed at that point someday I would get to see him.

Fast forward about 16 years later. I kept putting off seeing him, but finally in 1989 I planned to make the trip from Reno, Nevada, to Lexington, Kentucky. I had all of the arrangements made months in advance. Unfortunately, tragedy struck when my oldest brother, 56, was diagnosed with colon cancer. He was given only a few months to live. I seriously thought of canceling the trip, but when I saw my brother for the last time, about a week before he died, he insisted that I go and get a picture of Secretariat for his wife. It was literally a last wish. Two weeks after my brother died, I fulfilled that request.

It was July 31, 1989. As anybody who lives in that part of the country knows, summer is not the best time to visit because of the godawful humidity. It was perhaps 85 degrees out, not so bad except for the fact humidity was probably 200 percent. There was fog in the air, or what I would call fog not unlike what southern Oregon gets in November, and I was sweating buckets. Despite this, Lexington is surely one of the great showplaces in the United States, looking as it does like a giant golf course.

It was also very easy to get around, and I had absolutely no difficulty getting to Claiborne Farm on the Paris Pike in Paris, Kentucky. No difficulty except I had to drive perhaps 70 mph on a narrow two-lane road. Anyway, I met the groom at the parking lot, and after touring the stallion barns and seeing such greats as Danzig, Devil's Bag, Ferdinand, Forty Niner, Nijinsky II, Mr. Prospector, Private Account, and Ack Ack (to name just a few), I finally got to see Secretariat. Of course, I took many pictures, though there are none of me posing with him since I took them all and I was alone. After taking the pictures, I walked up to the great horse and petted him. I can't describe his appearance except that his coat was an unnatural red color--not golden chestnut but RED as in the color of a fire engine. He was also very serene. "There was never a better horse," as the groom described "Red," as Secretariat was called. After I said I felt there would never be another one like him, the groom led Red back to his stall, a stall that had his sire Bold Ruler's name on it and plaques detailing Red's racing career and Triple Crown sweep. There wasn't any doubt who the major attraction of that farm was.

I also will never forget when we walked to the stallion cemetery and visited the final resting places of some of the greats in the past: Princequillo, Reviewer (sire of Ruffian), Gallant Fox, Sir Gallahad III, Round Table, and Claiborne's own Swale, who died of a heart seizure days after winning the 1984 Belmont Stakes. I told the groom that I had traveled some 2,000 miles to see Secretariat, and I felt that if I didn't see him this year, I would never get another chance. The groom replied, "Well, he is 19."

And with that I left.

Never in my wildest dreams that the spot where I made that remark would be the very spot where Secretariat would be buried just nine weeks later. I was just devastated when I had heard the news Secretariat had to be put down because of incurable laminitis on October 4. He was still very healthy when I saw him, but he had his first attack about a month I saw him, and it finally recurred in all four feet. Of course, it was impossible to save him.

I can't explain the timing except perhaps it was meant to be, that Secretariat remained healthy just long enough for me to visit him, and then, after that, he had done his job and that was it. My brother's last wish fulfilled, my dream fulfilled.